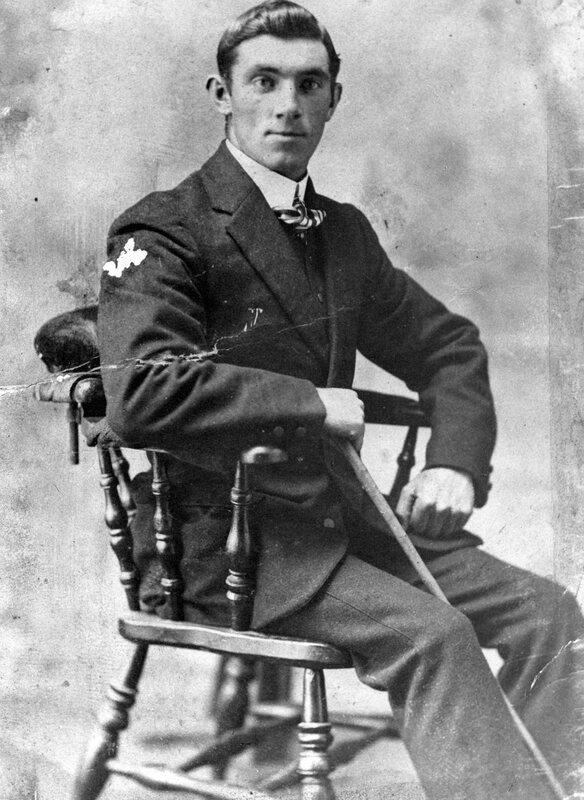 Grandfather Alan Davies about 1910 in Britton Ferry where he was a Timber Merchant.
Walker  ancestors. [ Lambourne Morgan mothers parents]
​Allan Davies. 14/03/1889--12/10/1941.
​Born in Kingsley Road  Knighton, Radnor to William Price Davies, railway platelayer and Margaret Davies [nee Lewis]
​He lived in Briton Ferry at Pottery Place and was a groom when he married Sara Jane Morgan, one of 14 children . Her father being Farm Bailiff at Pentre Lago Farm. Family stories say he worked for Lord and Lady Mansell at Stradey Castle. William Price Davies by this time had become a Timber Merchant.
After the birth of Aunty Peg they emigrated to Australia and were said to be on the water to South Africa at the outbreak of World War 1 in 1914.​ 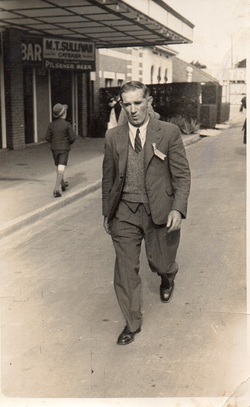 There have been several locations suggested for this picture.
I am certain that it is at the Exhibition Grounds , Bowen Hills.
The RNA office is behind the hedge and the bar is at the rear of what was in my time the double decker stand.
​The picture was taken on the day the Queensland Junior Boys Soccer team played a touring team. Grandad bought the 3 new balls used as the Association was unable to pay for them. This was about 1938 at the end of the depression and granddad had a dry-cleaning business on Coronation Drive near Grey Street Bridge. At the time of his death in 1941 the business had closed and he was running a bus service from The Gap to Ashgrove tram terminus and living at Frazer's Road Ashgrove.

​Uncle Ernie [dad's younger brother] played in the game. His story is available separately at the site below.
​http://ernestlewisdavies.weebly.com 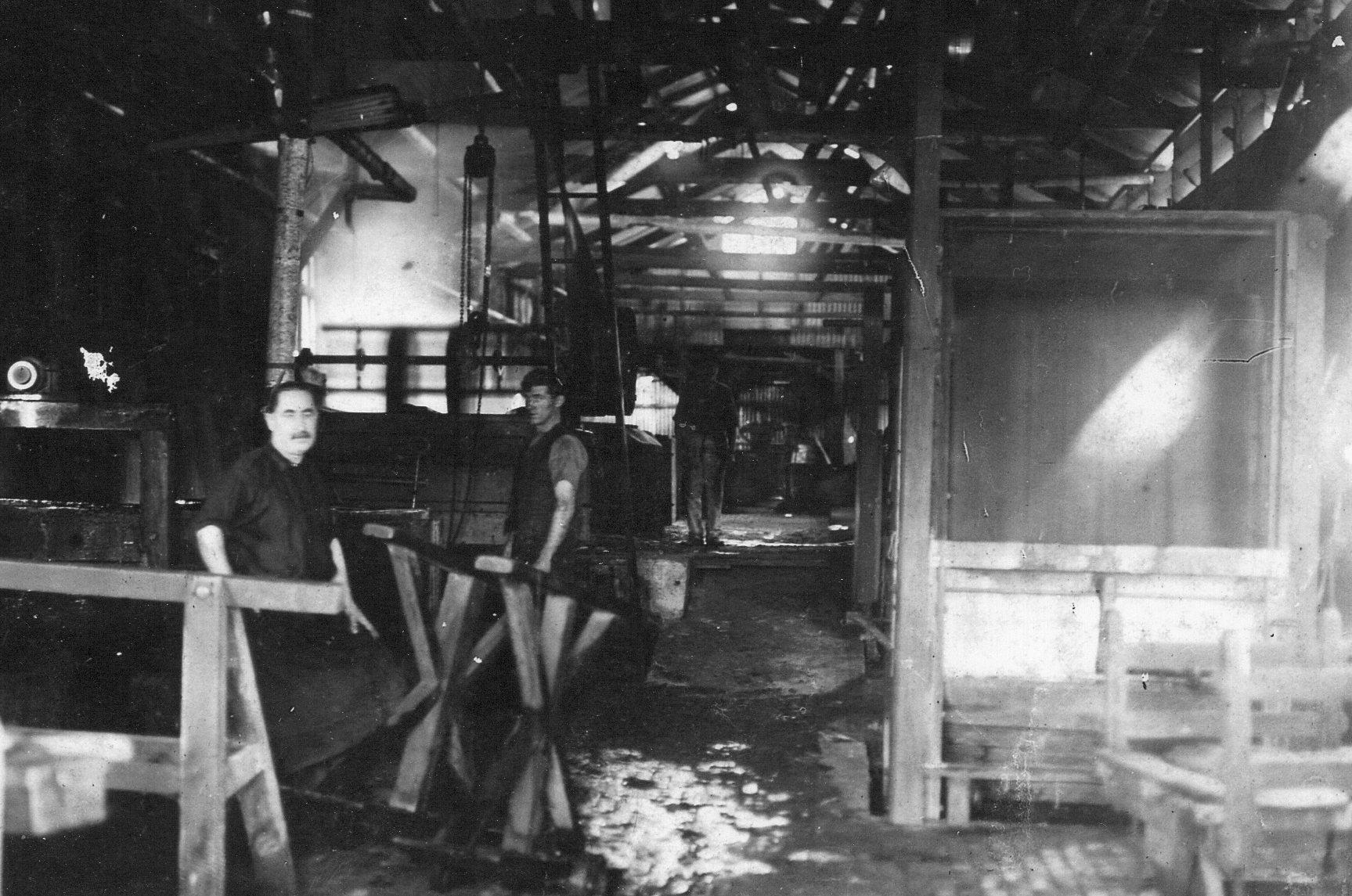 This is thought to be the Capalaba Tannery where Grandad worked dying hides. 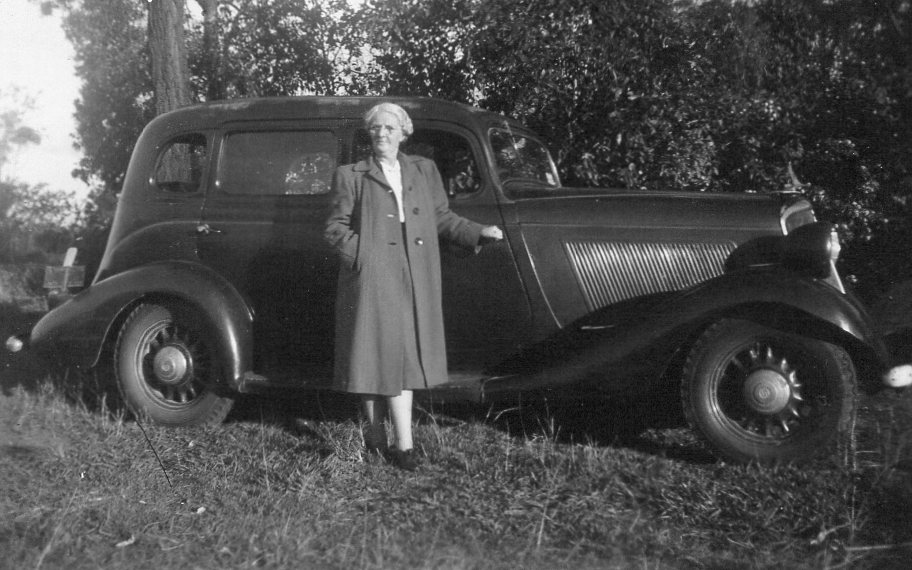 Grandmother Sara Jane Davies [nee Morgan] With the last car a Studebaker purchased by grandfather and after his death it was looked after and driven by our dad. We were only allowed to use it when Grandma and her two daughters could accompany us. 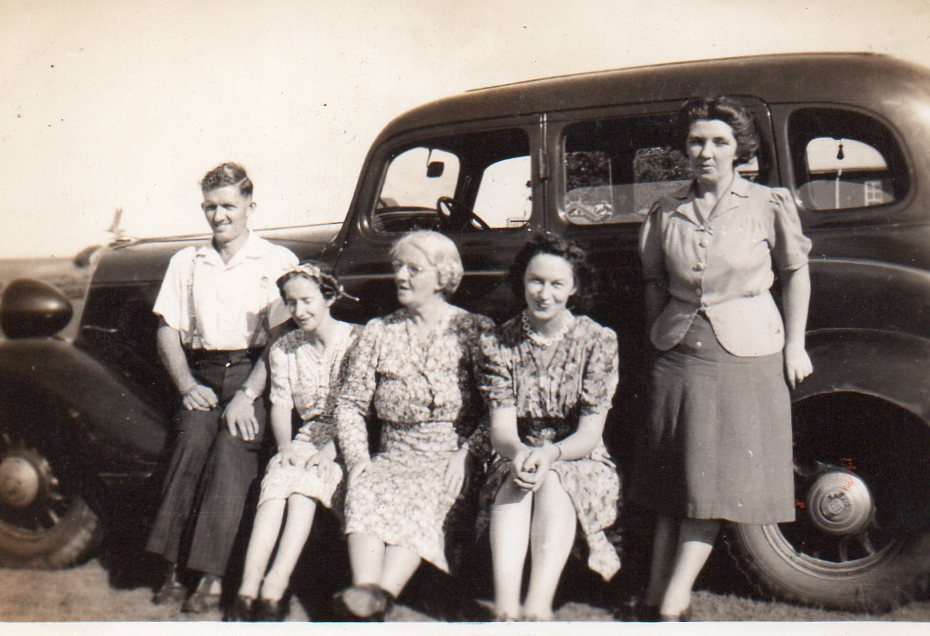 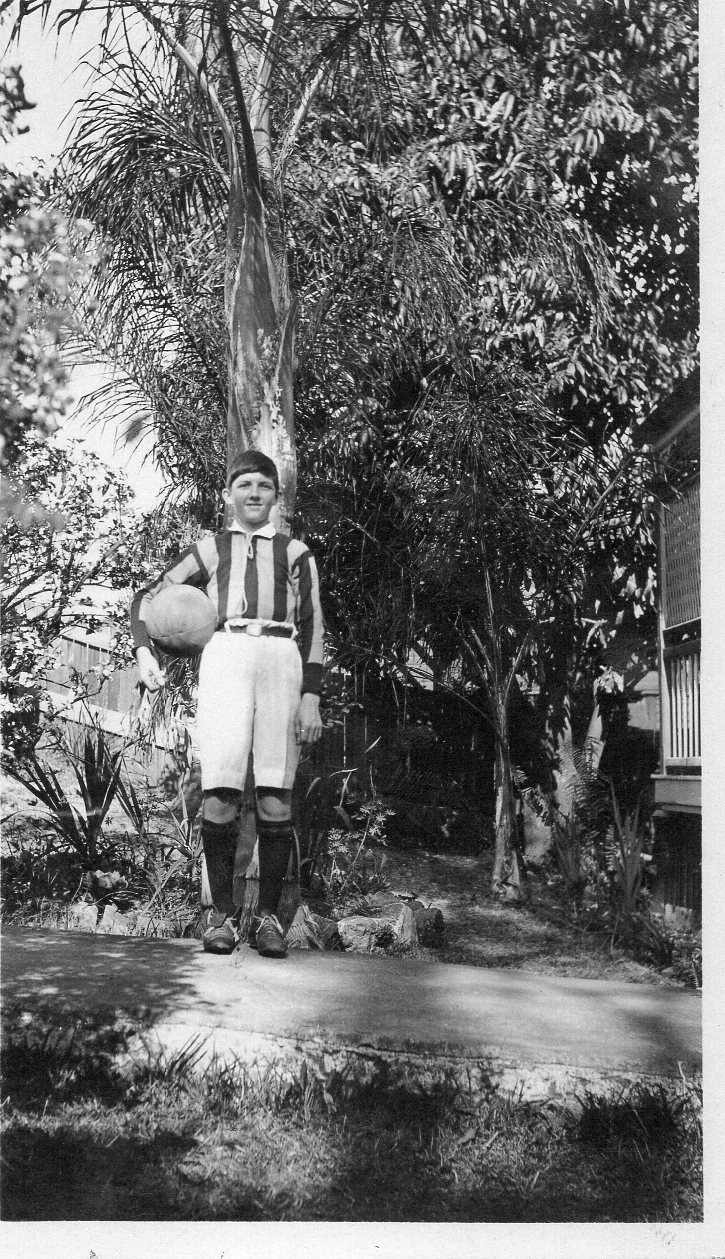 An early picture of Dad when He played for Toowoong. 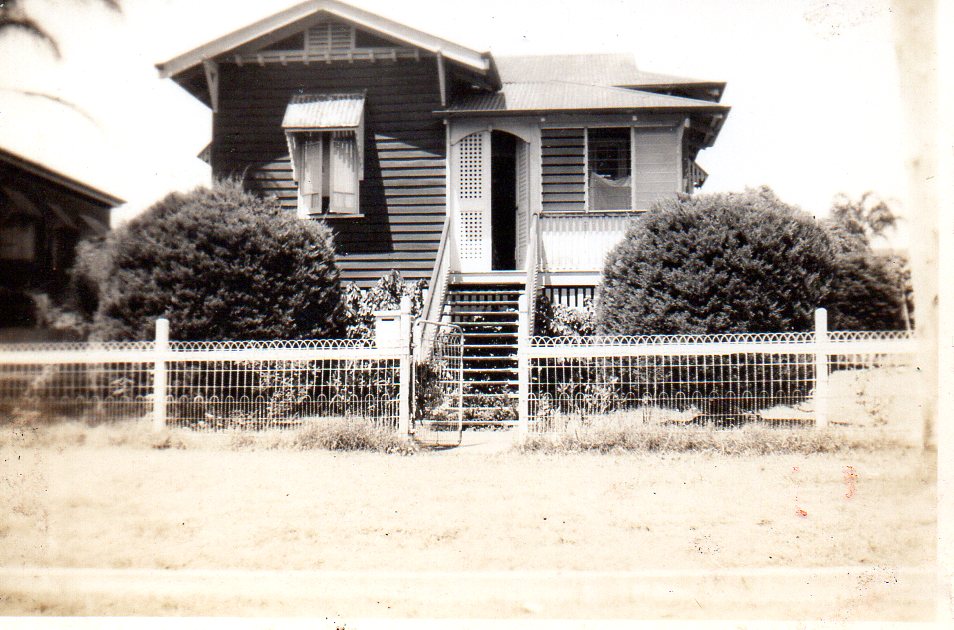 Flower Street Nundah.
​Dad went to the auction and purchased this house for £850.00 on Grandma's behalf after the bus run and house in Ashgrove were sold soon after Grandad died. 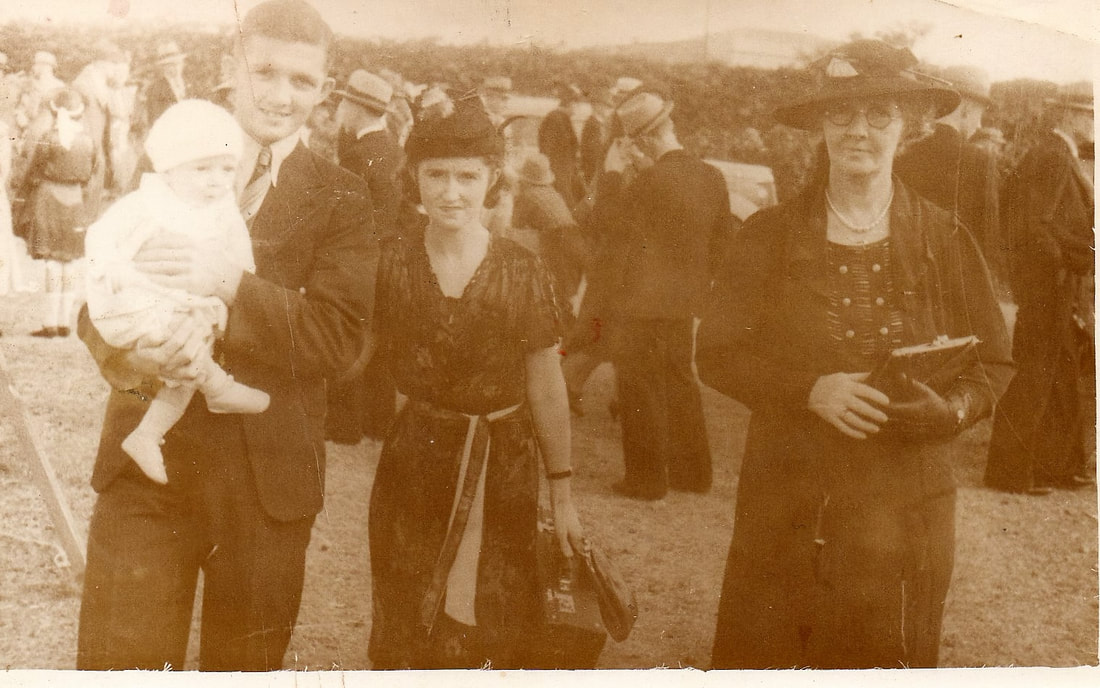 Dad holding me, Mother and Grandmother maybe at Grandfather's funeral. 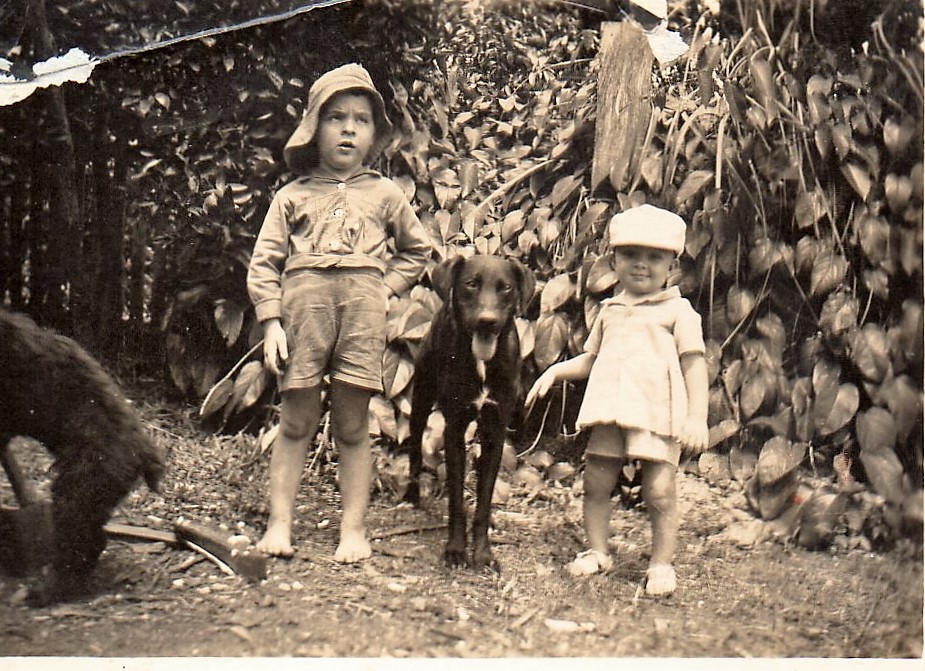 ​Alan, the dog and I might be in the back yard at Nundah. 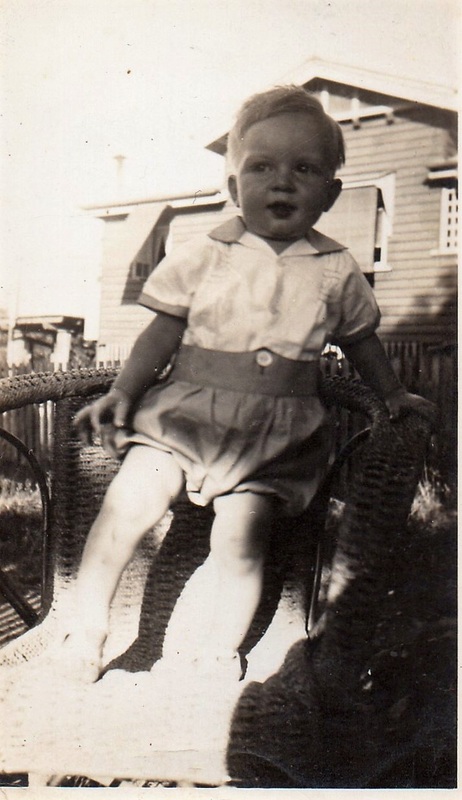 I remember the cane chairs and I think this is the back yard at Nundah.​ 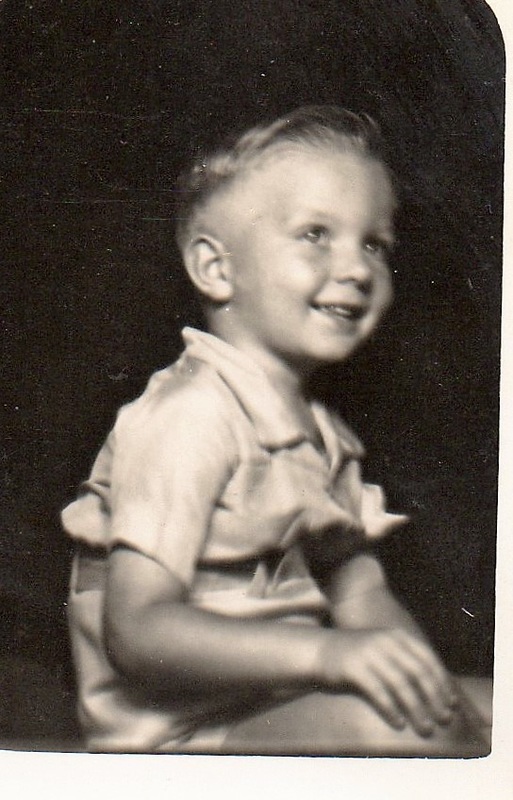 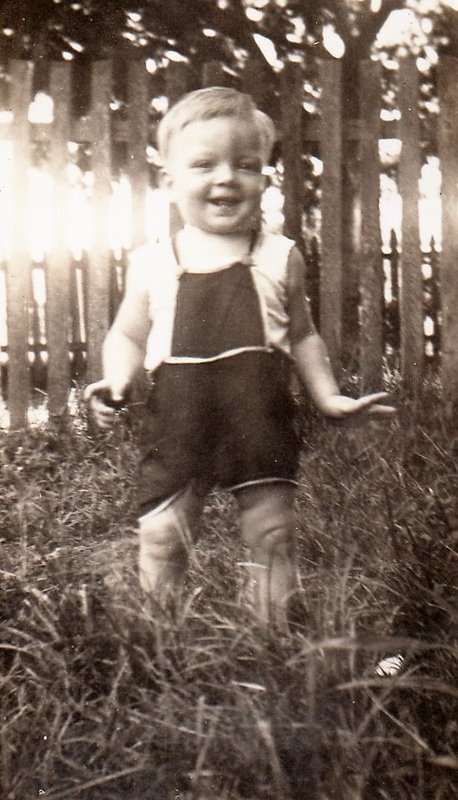 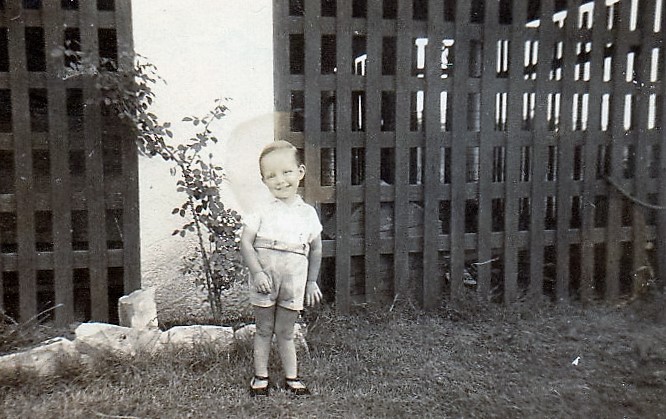 This is Hendra and I exhibit a known trait of having my head on an angle. [seen in a lot of pictures] 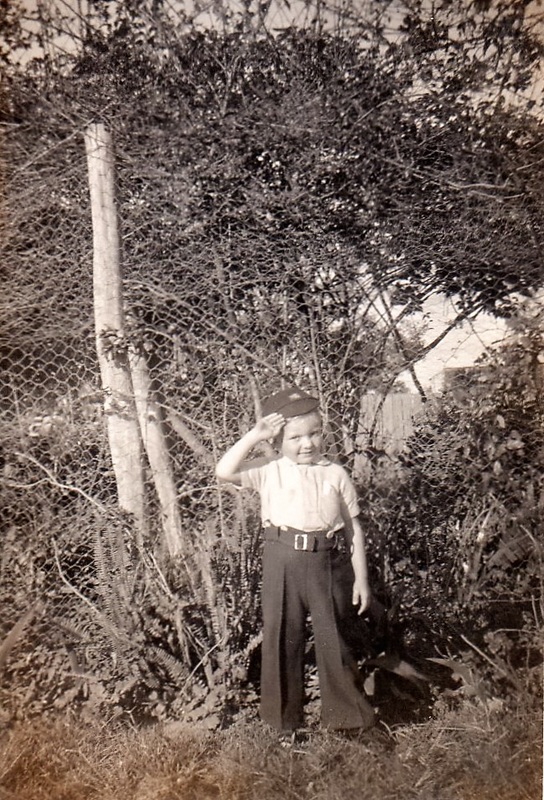 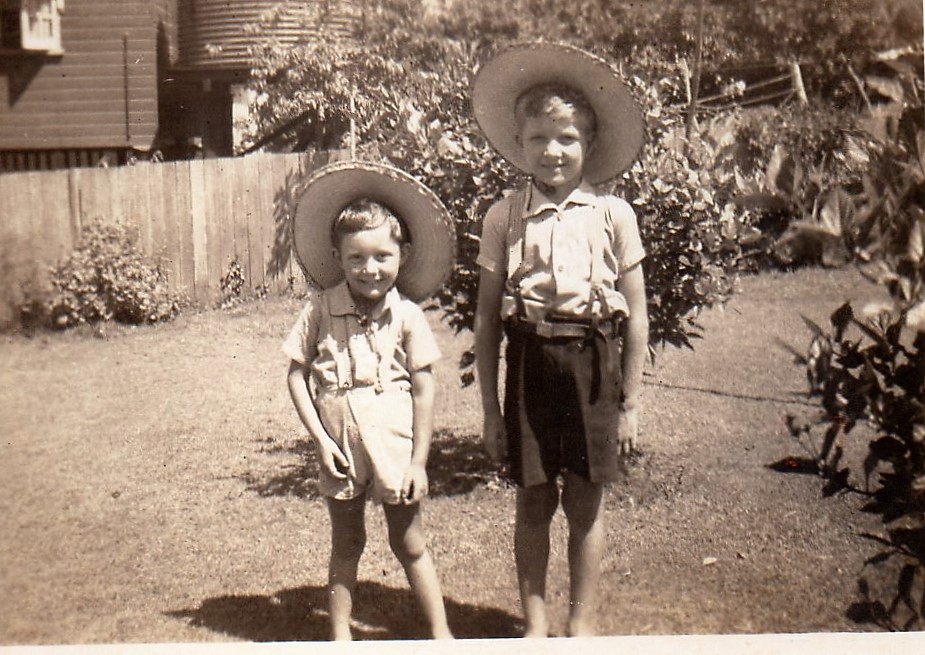 With Alan in the back yard at Nundah.
​ 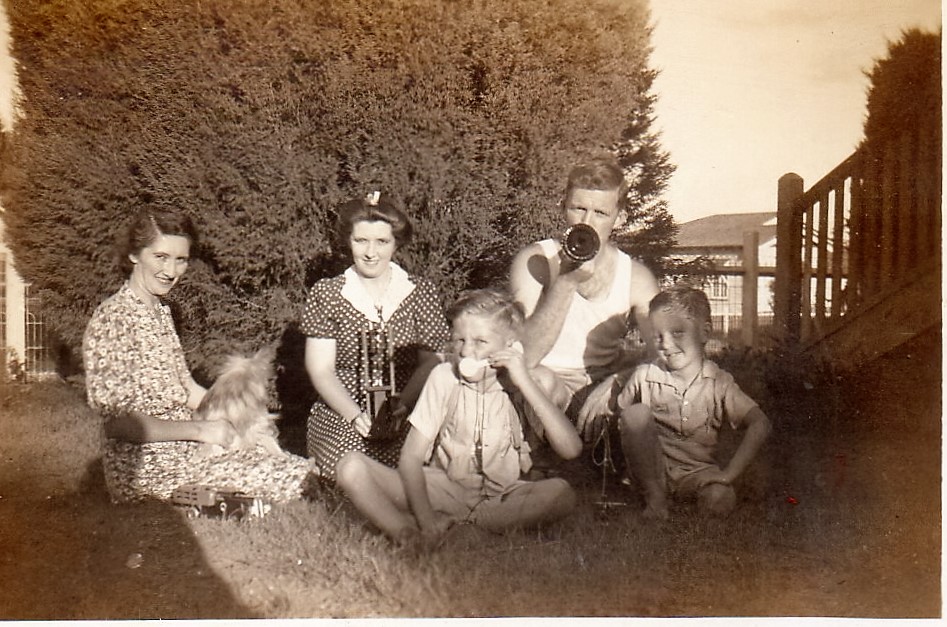 ​Aunty Dot and dog, Aunty Peg, Dad and Alan with Me in the front yard at Nundah.
​ 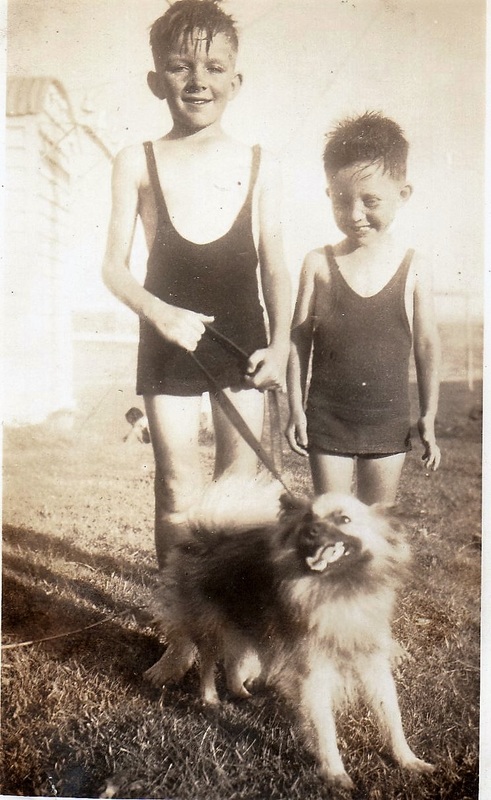 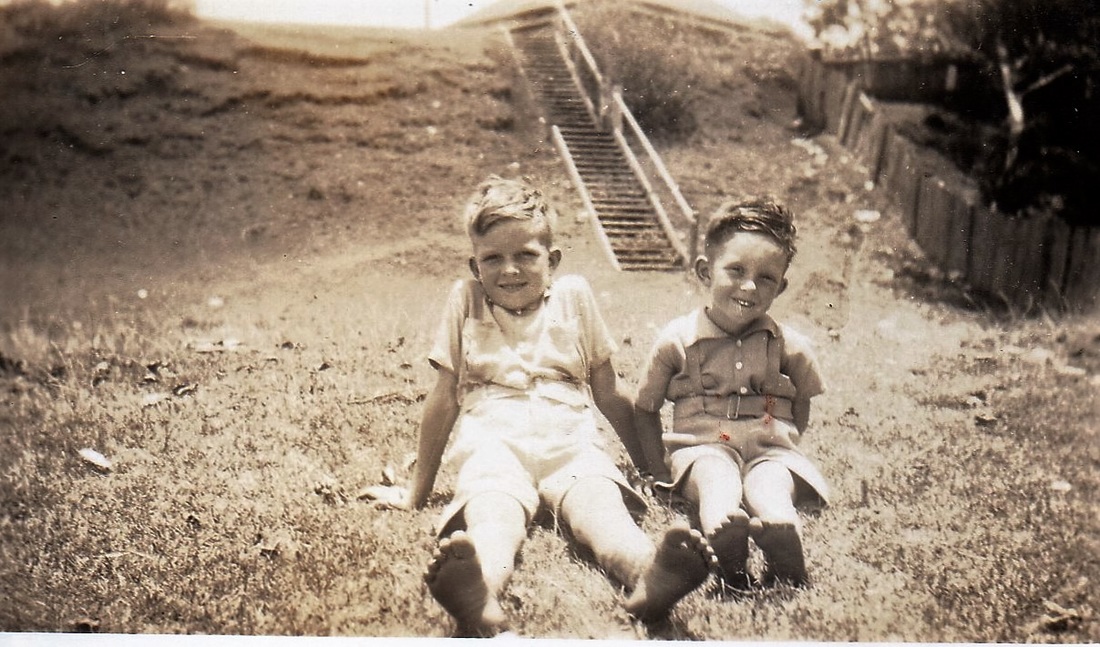 Thought to be at Cleveland on a Sunday visit to the bayside. 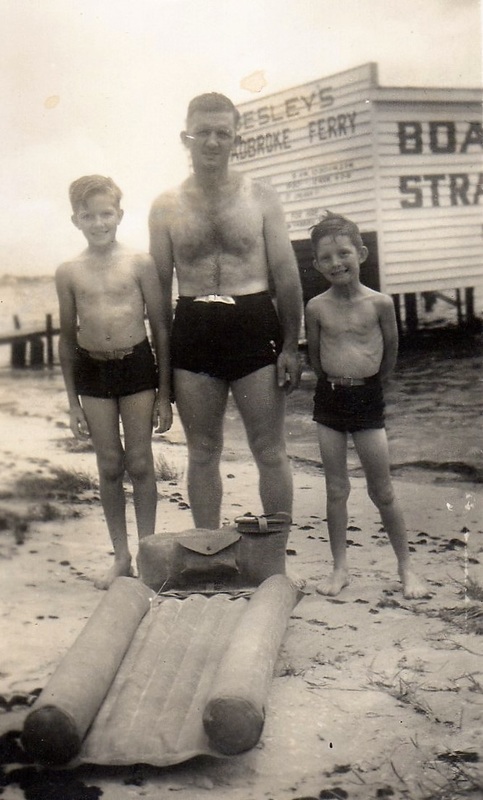 About 1946 when we tried an inflatable from the war thought to be used on aircraft that might crash into the sea. 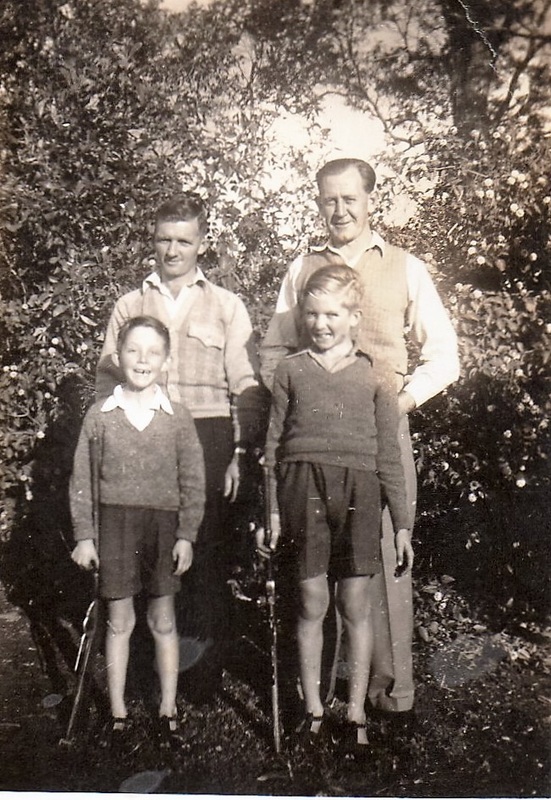 ​The three of us with Uncle Ed Hobbs , Aunty Dot's husband 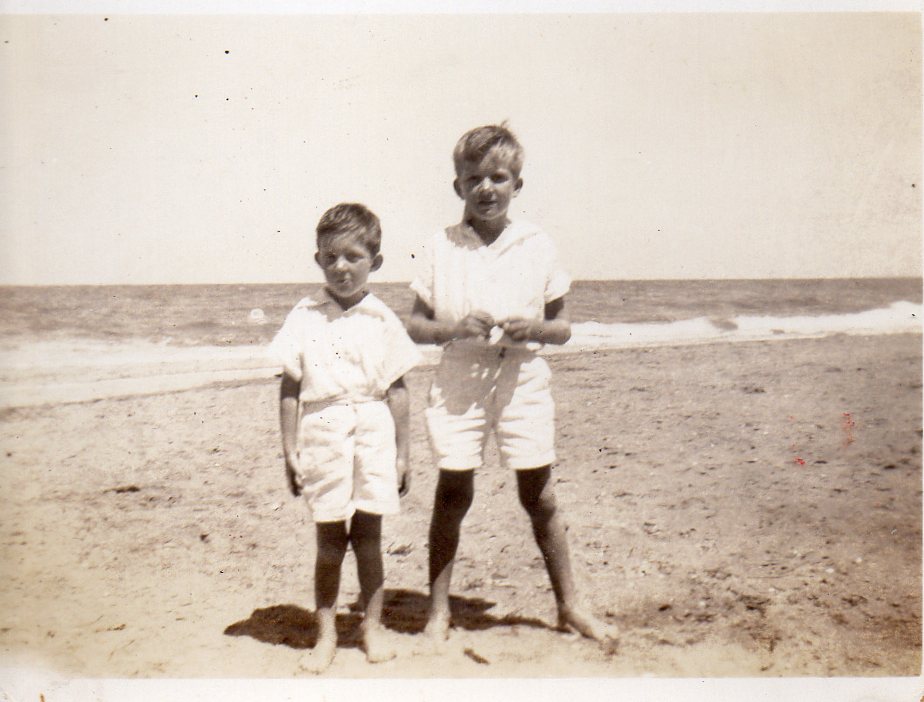 Probably the last holiday as a family at Main Beach on the Gold Coast. 1948. 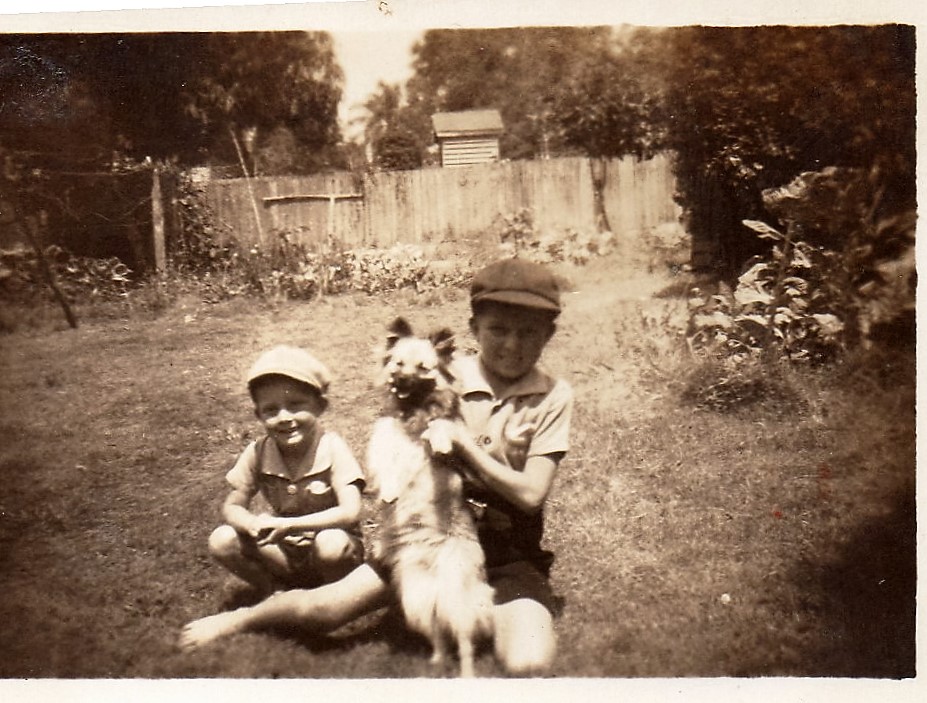 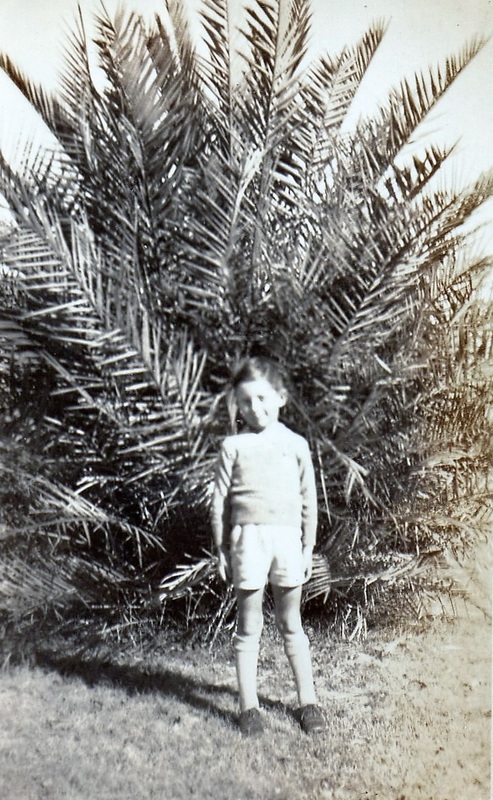 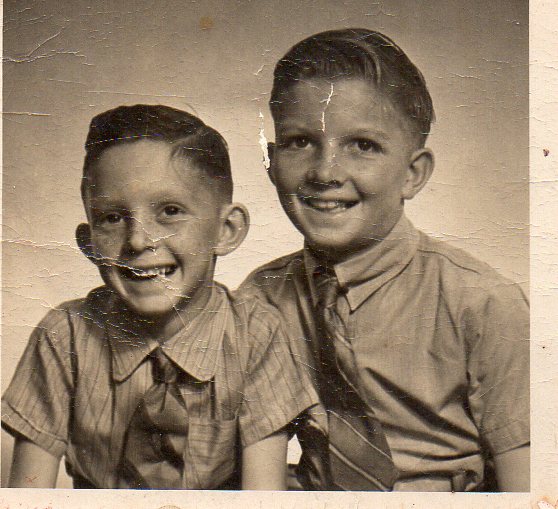 A school photograph about 1947 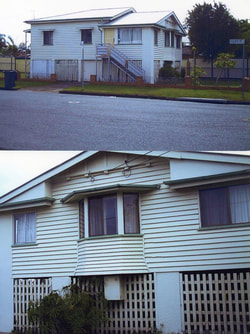 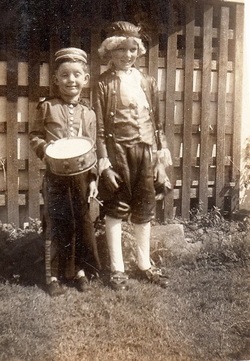 Drummer Boy and Pirate ready for Fancy Dressed Ball
The first house that I can remember , corner of Nudgee Road and Lilley Street [ my pic in 2009] opposite Doomben Racecourse. We lived there until going to Chelmer 1948. 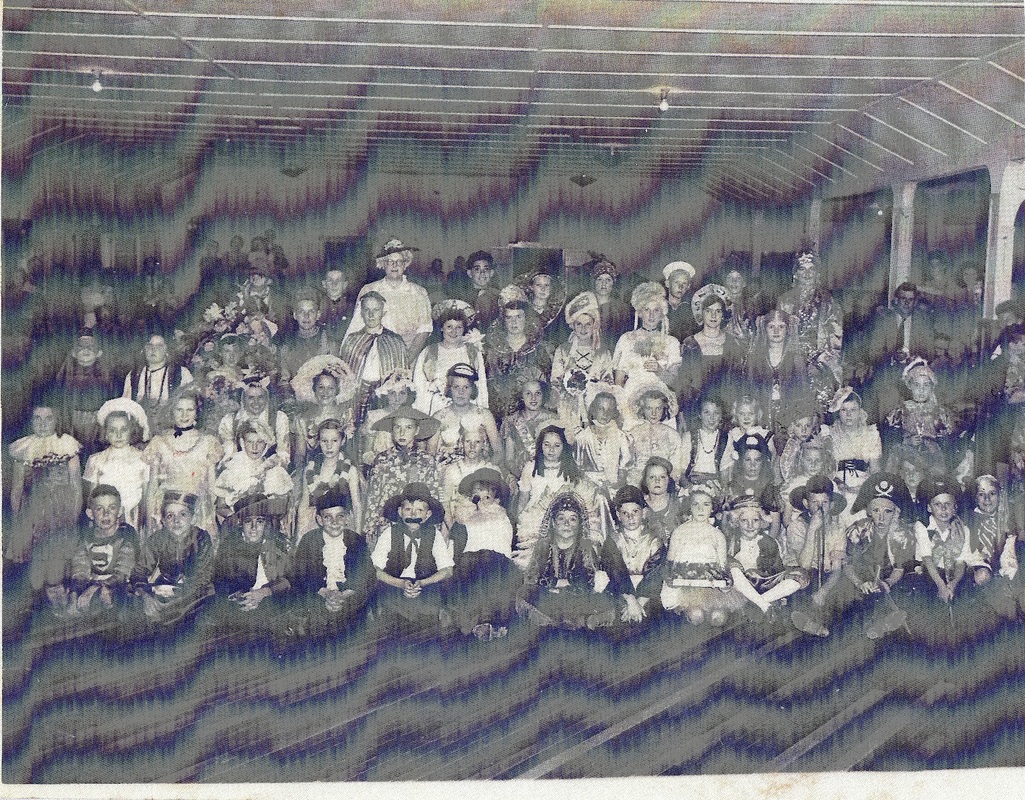 ​Hendra State School fancy dress ball 1946-7 in the American Army Officier's club house that was burnt to the ground a couple of weeks later under WW2 lend lease.
​John Finglas, a fellow pupil and life long friend has named many of the children.
My life story and family history and
stories are published on "Kindle", at
http://www.amazon.com/dp/B00B28KKYA
My art relating to it is at
http://blackbirdacrylicart.weebly.com/
In memory of Uncle Ernie at
http://ernestlewisdavies.weebly.com